Hats off to Bob Wilkins

Before I get too much further into this blog, I have to take a little time to honor the late Bob Wilkins.  Bob was the host of Creature Features on KTVU Oakland in the '70s and '80s.  That was the first place I saw the original Night of the Living Dead, and tons of other movies. Some great and some not so great.  The cool thing was Mr. Wilkins had a great sense of humor, and made even the dumb movies entertaining.

Bob also had an afternoon show that we always watched after school, where he became Captain Cosmic with his robot 2T2. On this show, he featured Japanese Sci-Fi series like Ultraman, and Space Giants, where giant robots like Goldar battled other giant robots and aliens.  Great stuff!

Sometime around 1979, Bob plugged the movie Slithis (a B movie that was kind of a Creature from the Black Lagoon knock off).  On his recommendation, we went to the drive in and were floored about how crappy it was! LOL  I even wrote him a letter to complain.  A week or so later, I received and envelope from KTVU, with a hand signed "form-letter" from Bob himself!  The funny thing is he added a post-script that read: "Glad you liked Slithis. Ha!"  He also included an autographed photo of himself!  I loved that guy!

So anyway, Here's to you Bob Wilkins!  I hope you are up there somewhere smoking a cigar and making more Creature Features! 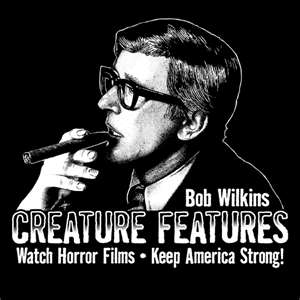