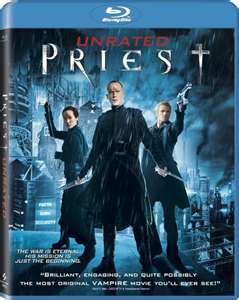 The quote on the cover of this new Blu Ray claims it is "quite possibly the most original vampire you'll ever see!"  That may well be...if all you ever watch are vampire movies.  And if don't watch anime vampire movies.  But more on that in a moment.

Priest is based on the graphic novel by Min-Woo Hyung, and was Directed by Scott Stewart (Legion).  It is about the quest of a warrior priest, portrayed by Paul Bettany, as he seeks to rescue his niece from the clutches of an evil Vampire and the hordes of other vampires and creatures that follow him.

The priest has a problem to start with. Mainly, the leadership of the church he belongs to, won't recognize that a vampire threat exists anymore. This is is due to the warrior priests supposedly annihilating the vampires, and banishing them to reservations.  The leaders of the church disbanded the priests because they felt they were a threat to their power.  So the priest is told if he goes against the church he goes against God.  Good thing for his niece, he follows his conscience rather than the corrupt leaders.

He joins forces with Hicks, his niece's suitor.  Hicks is the sheriff of the outpost where the priest's niece and her family lived.  They set out to find out the source of the vampire army, and are joined by a priestess (Maggie Q).  They ultimately discover the vampires live on a huge train, and are being lead by Black Hat a big, almost cowboy looking guy with a few secrets.  They begin to battle it out to save the niece and ultimately many more.

I really went into this thinking I would like it, even though it didn't look like a horror movie (and it isn't), but ultimately, it left me cold.  It wasn't for a lack of trying: the film boasts a $60 Million budget, and it looks it.  The special effects are largely great,  the action scenes are good, the musical score is rich and the creatures are scary looking.  The performance of Paul Bettany is very good, as is that of Carl Urban (Black Hat).

My problems with the movie are:   The story didn't draw me in.  I did manage to feel empathy for Priest, but nothing for the other characters.  The movie also has the post-apocalyptic world that somehow has reverted back to the old west as a backdrop.  To me this is just soooo overused.  The action, while good, shows the overwhelming influence of The Matrix, and Crouching Tiger Hidden Dragon. Some of the themes in this story seem typical (to a non-enthusiast) in the world of anime and manga (see Trinity Blood).  It actually plays out more like and action western (with vampires) than anything else.  But...even I could deal with it if it managed to entertain me, and to be honest, it just didn't do it for me.

One particular scene near the end really sums it up for me, but I don't want to spoil it for those who want to watch it.  All I will say is that if the build up of the priest's convictions had been properly handled, there would have been alot more contrast and would have made the scene much more compelling.  As it was, it became just another snap decision that faded away.  I can't possibly recommend a purchase of this movie.  Maybe a rental, if you want an action movie, and haven't watched much sci fi.  Priest gets a 4.5 out of 10 from me.

Thank you to Sheng Wi for the recommendation!  Sorry I didn't care for it, but we all have different tastes!

Priest was pheninomal. I seen it at the theater which I'm sure makes a differnec. The seen where he demolishes some vamps while the hot chick throws some rocks and he flies on them was pheniinomal. I would come in with a 9 on that bad boy: great vamp movie.

I have anutha one for you Boss Butcher I think you will like better called Stakeland. Got the Blu-Ray and it is incredable, SCARY vamps. Let me know what you think when you watch it.

Hurry up on the podcast some news would be helpful.

Any news on the podcast?

easy question a 1st grader could answer responsibly i need no explanation.

YES or NO, BOSS BUTCHER are you apart of the new horror podcast?

Will definitely check out Stakeland. Thanks so much for commenting!

Anonymous-
I may at some point review some of these series, but it's not in the near future.
To anonymous and wb-
The podcast is moving along, and I hope to have an announcement of some kind within a week! Thanks for stopping by!

Keith-
As for the date, like I said above, I hope to have an announcement of some kind within a week. The group working on this is Hellhunter, Bloody Lizzy, and myself (with help).

Anonymous-
YES I am a part of the podcast. Thank you for checking in!

HJ was great I will miss it- Ormand

Anonymous-
We miss it as well. Hopefully our new efforts will be enjoyable for you listeners. More later! Thanks for stopping by!

Boss Butcher,
I just heard Dr. Shark talk about a vampire movie called Blood Shot with Brad Dourif, have you seen it and what are your thoughts.
Hear you soon I hope,
Hermen

ill taker youre advice and avoid priest sir i value your opinion when the podcast hit the street?

Hermen-
I haven't seen it but will check it out at some point! Thanks for commenting!

Anonymous-
It's very humbling to have you value my opinion, thanks! I really don't think you'll miss much! When I know a concrete date on the podcast, I will post it here! Stay tuned!

Anonymous-
I'll be getting some more picks up soon, the podcast is a work in progress. BTW, Hellhunter has started doing mini audio reviews at his site! Check it out!

Bobby-
Well, I can't bring back the Horror Jungle, but Hellhunter, Bloody Lizzy and I are working on something for you all. Please stay in touch.

Horror Jungle was the crem de le crem of all horror podcasts out there.

I wish you men would reconsider and keep it going.

tyvm-
I would like to get to one of them this week. We'll see how it goes. REAL busy! Thanks for commenting!

Shelly A.-
We are so happy you loved the Horror Jungle. I can't bring it back, but I am working on something for you listeners! Thanks for stopping by!

Kirklin-
There will definitely be more reviews on the way! Glad you are enjoying them! Thanks so much!

I needed to thanks for this excellent study!! I undoubtedly savoring every single small little bit of it I've you bookmarked to check out out new things you post…