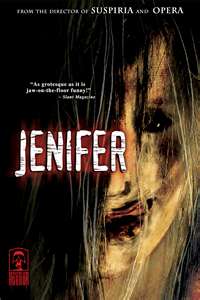 Streamed this one last night.  It is one of the episodes of Masters of Horror, which if you are not familiar with it, is a series of 1 hour, made for TV horror shows.

Jenifer starts out very quickly with a detective named Frank Spivy (Steven Webber) happening along a man attempting to murder a young woman with a meat cleaver.  The man won't stop, so Spivy guns him down, and rescues the woman (Carrie Anne Fleming).  As he comforts her, he sees that she is disfigured.  And I mean DISFIGURED!  After he takes her in, she is sent to a psychiatric hospital, because there is no where else to put her.  She is mentally impaired, and is mute to go along with it.

Spivy can't stand that she is forced to live in such a deplorable situation, so he takes her to his house, much to his wife's disappointment.  As he is trying to figure out what to do with her, Jenifer begins to act out sexually toward him, and heck, she does have a dynamite body so he succumbs to her, uh....charms.  Soon there are major drawbacks to his relationship with Jenifer, starting with her animalistic  devouring of the family cat!  It only gets worse from there.

This idea has so much promise, and it does deliver to some degree. However, it is a 1 hour tv show, and that is all you'll get out of this.  It is ok to watch for free, or as part of your Netflix subscription, but I would never spend any money to buy it.  The story is engaging, but there are many holes in the plot, but the incredible body of Carrie Anne Fleming will help you stick with it... or better yet, just watch Deadgirl which is top-notch! I have to give Jenifer a 4.5 out of 10.
Posted by Boss Butcher at 6:30 PM

Sir Vampire,
I put some requests in on the forms for fan reviews, now that it is over I am coming right to you.

The two I was interested in are,
1. Cronos
2. Vampire Boys

Anonymous-
It is my pleasure to write these reviews! I love watching and discussing movies, and I am grateful you stopped by and commented!

Cronos is definitely on my short list! I will also check into Vampire Boys. Thanks so much for the recommendations, and stop by any time!